XML 2004: After Declaring Victory, What's Next?

This week I'm attending XML 2004 Conference and Exhibition, organized by IDEAlliance, at the Marriott Wardman Park Hotel in Washington, DC. Titled "XML: From Syntax to Solutions," North America's premiere XML conference is moving in the same direction as XML.com and XTech 2005. A broad industry consensus has formed around the idea that the era of core XML specification-making is over, but that a great deal of work remains to be done.

In fact, a triumphalist mood has captured the core XML developer community lately, especially here in DC. I keep hearing keynote speakers, Microsoft evangelists, and other assorted luminaries ask why the press hasn't sent the "we won!" message more clearly. But more about that later on.

The conference started with two very different keynote presentations. The first, by Rod Smith, an IBM Fellow, focused on the role of XML and related web service technologies in IBM's efforts to transition research and development into shipping products and infrastructure. The second, by Michael Daconta, the Metadata Program Manager of the U.S. federal government's Department of Homeland Security, focused on the transition from application-centric IT to semantics-centric IT.

IBM's alphaWorks and developerWorks efforts serve as a bridge from R&D and the work of standards bodies to IBM products or to pieces that become part of the open source infrastructure. Thanks to the spread of the web and the internet, both business and government want to work with new technology as soon as possible. IBM has found that XML and the Service-Oriented Architecture (SOA) are central to its efforts to build system integration projects in the time frames required by customers.

Smith claimed that most innovation on the web since about 1998 went into middleware, but that it's now shifting back toward client-side innovation. I think that's generally correct: SVG, XForms, massive new Wiki uptake, Flash, device independence, E4X, and the resurgence of Mozilla in the form of Firefox all add up to one salient fact: "the User Interface," as my predeccesor Edd Dumbill put it, "is hot again."

Smith struck, to my ear at least, one false and sour note. He claimed that part of the resurgence of client-side innovation is something he called a "renaissance of scripting languages," by which he meant PHP, Perl, and Python. But those languages, and language communities, are only undergoing a rebirth if you think they were dead. Sorry, Rod Smith, but they were never dead; rather, IBM simply became Java-obsessed for the past 10 or so years.

As a long-time evangelist and user of Python, I'll also add that this notion of "scripting languages" as somehow less real or serious or capable than languages like Java or C or C# is completely wrong. It's at least as wrong, if not more so, as Smith's claim that XML is impacting "scripting languages" by becoming "first class datatypes," offering easier, more integrated APIs than DOM or SAX. This is only news in the CIO's office at Fortune 500 companies. XML.com has been telling XML developers, and vice versa, about native XML databinding APIs for, well, for a very long time.

Another theme running through Smith's keynote--and one that runs through the conference as a whole--is the idea of data-centricity. Smith claimed that, in IBM's estimation, the single most important technical reason driving corporate adoption of XML is "flexible evolution of data." And, in a turn of events one doesn't often see, Jean Paoli, one of Microsoft's chief XML evangelists, was making the same kind of claims to the press during the conference.

Another pseudo-revelation from Smith concerned wikis, weblogs, and RSS. Though perhaps I shouldn't be so catty, since this year's conference does seem heavier on the non-geek, non-programmer than other conferences in the past--owing, I surmise, from its location in DC, which has drawn a large contingent of mid-level technocrats.

At any rate, Smith suggested that wikis are useful and mentioned both JotSpot and TikiWiki. You mean Ward Cunningham and all us geeks have been on to something for all these years after all? Wikis are, perhaps next only to Scheme interpreters and IRC clients, one of the most often implemented geek toys.

Smith also suggested that weblogs and RSS might be useful outside personal or professional journalism--an insight that dates to at least early 2001, if not before.

I can just see it now: by 2008 or 2009, the keynoter at the big XML conference will assure us that an entirely new category of web software, the "social bookmarks manager," will be the Next Big Thing. I wonder how many del.icio.us clones will be available on Freshmeat.net by then? Oh, well, that's probably enough grousing: one sign of success is when the Big Corpos steal from you and dare call it "innovation."

The other first-day keynote was given by Michael Daconta, Metadata Program Manager, at the Department of Homeland Security (DHS). If you aren't a U.S. citizen, you may not know that DHS is the newly formed part of the executive branch of the U.S. federal government that is responsible for...well, to be honest, I am a U.S. citizen, and a fairly well-informed resident of DC, and I'm not entirely sure what DHS is about. I know that it has an enormous budget, lots and lots of employees (all or some chunk of whom, last I heard, aren't allowed to unionize!), and that it's a big government response to the terrorist attacks of September 11, 2001.

Setting aside the unfortunate political associations of "homeland," the DHS has some information coordination and dissemination responsibilities across several other parts of the U.S. federal government, including the military and intelligence agencies. Or, as Michael Daconta put it, they're working on the "mother of all integrations."

Well, fair enough, I suppose. Though I can't help but wonder--especially if some of the audience murmurings I overheard are representative--if the conference organizers really thought this through carefully. A fair number of attendees are not U.S. citizens, and presumably don't really care about DHS. Others are U.S. citizens and are either neutral or indifferent or were opposed to the creation of DHS in the first place. As interesting as the IT challenges DHS faces are (or aren't, depending on who you are), I think the conference organizers might have reconsidered.

Of course, none of this is a slur against Daconta, who smartly took the opportunity to talk about the challenges he faces, suggesting that they are the challenges that this community should occupy itself with now that basic XML victory has been declared. Daconta's technical enthusiasms lie solidly within the realm of the Semantic Web--essentially, to accomplish the DHS's IT goals, Daconta claims that they need semantic, not just syntactic interoperability.

That's probably right. Hell, it's almost certainly right. And as someone who does Semantic Web research, I'm happy to have a potential new source of funding for R&D. I am, however, a bit ambivalent about the ends to which it may well be put. But such has it ever been, I suppose.

Daconta talked in themes very similar to Rod Smith's, including the idea that data has now become widely recognized as more crucial than the software that produces and consumes it. Both keynotes suggested that we are in the midst of an historical change in the relation of code to data. I think they are both right, though I'm not sure what really follows from that change.

I am uncertain because--and this is a point neither keynoter made nor addressed--we lack, in the U.S. as well as in the EU, though it's worse over here, the political will and the political organizations to make the "Age of Open Data" really work for people, as opposed to corporations. We hold 21st century technology, and the open data it produces and consumes, hostage to 18th century legal structures and models. It doesn't matter very much at all that we may be living through an Age of Open Data if it's all DRM'd and licensed and restricted, such that we can only do with it what Hollywood and Silicon Valley say we can do with it.

At any rate, XML 2006 really should ask Brewster Kahle or Cory Doctorow to give a keynote, for ideological balance, if nothing else.

This conference presents the XML Cup Award each year, and I'm happy to say that Robin Cover and Jean Paoli were awarded Cups this year. Robin Cover is responsible for the CoverPages, the single best and longest-running resource for tracking XML development, particularly XML application and vocabulary work. Jean Paoli is the person who's most responsible for Office 2003's XML facilities. And that may make Paoli, in the long run, responsible for indirectly creating more XML than anyone else. Congratulations to Robin and Jean. 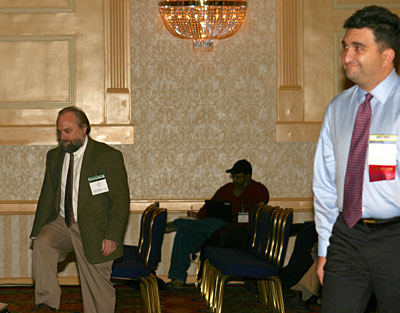 Stay tuned this week for more coverage from XML 2004 in Washington, DC.