All designers and developers face the problems of vague requirements, poorly defined data models, and last minute requirement changes. These sad facts of life drive some developers to embrace a document-driven architecture,but this approach usually breaks down when confronted with an environment that includes non-network attached devices that necessitate a thick-client application. This article describes the components and techniques for building a document-driven, thick-client application using XForms that operates on a non-network attached system. This approach provides for decreased deployment costs, cross-platform operation of a thick client, and increased component reuse within an enterprise. Although web-based applications are usually optimal for enterprise network deployment, there are classes of users that need access to the same types of applications while detached from a network. Using XForms, other XML technologies, and Java, a system can be constructed that provides detached users access to the same application systems as network attached workers and provides the flexibility of document-driven systems. This article covers the components used for a XForms-based thick client, including presentation, business logic, storage logic, and security.

Using inherently network-based technologies, such as XForms, in a thick client requires an unusual bundling of components. The resulting application consists of a native operating system executable that contains all the application tiers normally spread across multiple systems. Figure 1 illustrates the components and layering of such a thick client. 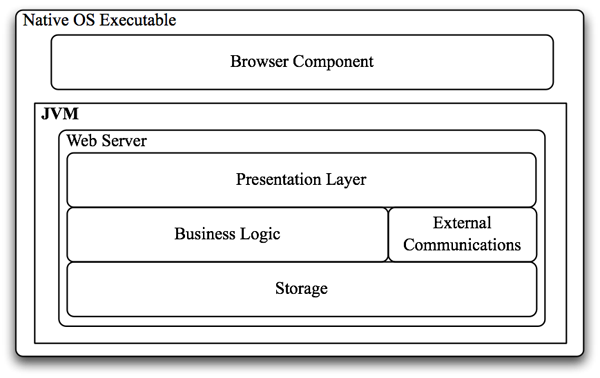 The Eclipse RCP project provides a robust runtime environment that includes an embedded browser component for displaying the output of the presentation layer. RCP wraps the Java programs into executables suitable for multiple target platforms. So one can use RCP to generate standalone programs for Windows, Mac OS X, Linux, and others based on the same Java components.

XForms supplies presentation controls suitable for clean interaction with the XML documents managed in a document driven application. XForms provides a modern, XML based approach to collecting user input in a web application. XForms goes further by providing the developer a means to fully control the page presentation by managing the content of the XML documents consumed by the form. For example, one can provide immediate feedback to the user regarding validation failures by using XForms events and actions to record field validation events.

Since the application operates with an embedded browser component determined by the OS, the best choice is for a browser-independent software translation component. Orbeon provides an XForms 1.0 implementation with some early enhancements from the XForms 1.1 specification. Orbeon also bundles an XML-centric business layer and an XML database into their standard distribution. Having all three layers bundled into one distribution saves time in bootstrapping the initial development environment. Orbeon also provides a very handy debugging widget that provides runtime visibility into the data model being edited by the form.

XPL allows a developer to define a series of steps to perform on an XML document. The steps can include XSLT transformations, document generation, filtering, looping, and calls to Java classes. In many cases complex business logic can be performed on a document without resorting to lower-level language code. The XForms model can perform submission actions directly to XPL pipelines eliminating the need for any glue code between the XForms and the business logic. XPL also provides hooks to call Java classes, EJBs, or web services directly, if more complex algorithms are required.

There are many choices for persisting data in a thick client application, including using embedded relational databases like Derby and HSQLDB, which all require XML-to-relational mapping. If mapping is performed then the XML schema and database schema must be kept in sync.

Security in a detached application typically focuses on access security and data security.

Access security, authentication and authorization, is handled either by the application container or surrounding operating system and is not particularly germane to this article, although it is important to most application designs. The most direct way to accomplish authentication is to use JAAS to protect the pages of the application. When combined with the local storage of the XML database, one can securely cache credentials for use when the user is offline.

Data security consists of protecting the data stored on disc to prevent unauthorized access. If the application is using XForms for presentation and an XML database for persistence, the encryption of the data must occur between the business layer and the storage layer. The business layer would emit and consume XML documents containing the encrypted data. The W3C XML Encryption Recommendation specifies a straightforward means of representing encrypted XML in a standard wrapper. A recommended approach is to keep some parent data elements in clear text for document indexing, and isolate all confidential information in a child tree that is encrypted for storage. The application of XML encryption can occur in a pipeline step following any business logic.

Benefits to This Approach

Benefits of this approach include:

Problems with This Approach

Some problems with this approach are:

Using XForms in a standalone application has proven to provide a flexible and maintainable platform for developing both online and offline applications. If your users have difficulty expressing or settling on a set of requirements, then a flexible system like XForms with a document driven infrastructure may be your best bet for success.