Five years after the introduction of SOAP 1.0, XML parsing is still the main bottleneck in web service performance. In search of components for a high performance web service security solution, we have executed benchmarks for various XML parsers in Java and C. These benchmarks cover event-driven parser models like SAX and StAX, object model parsers like DOM, and also new breeds of XML parsers like Apache's AXIOM, which only builds parts of the document tree in the memory.

Our intention was to find the right components for our high performance web service security gateway, so that it could be run on a small dedicated appliance. The limited resources of such a device brought the C tests into the game, since the Java virtual machine already needs a lot of memory. Object model parsers are the most important parser types in the context of web service security because they can be used to alter a XML document in memory. In this first part of a two-part series, we will present our benchmark results for the event-driven parsers like SAX and StAX, because those are used by the object model parsers, and therefore determine the performance of object model parsers by a large amount. First, we will give you a quick overview in the XML parser jungle.

Generally, there are two types of XML parsers. First are the push- and pull-parsers that simply read a XML document and return the data and structure of the document (e.g., SAX and StAX). Both are event-driven parsers because they return events that the developer has to handle. Push parsers implementations like SAX (Simple API for XML) return the data of the whole document in one stream and cannot be stopped (you could throw an exception in Java). Pull-parsers, on the other hand, only return data when they are asked to read the next node in a document. StAX (Streaming API for XML) is a pull-parser specification for Java defined in JSR 173.

The second type of XML parsers are object model parsers (e.g., DOM and Apache AXIOM), which not only read the data but also construct an in-memory representation of the document, which can be altered. Since DOM parsers mostly use SAX parsers to read in the documents, it is clear that the object model of a document is always built completely. This is a performance limitation if only data at the beginning of a document needs to be read and altered. New approaches like Apache's AXIOM make use of StAX pull-parser implementations to overcome this limitation. AXIOM only builds the tree representation of a document until the last node that was requested. Therefore, it does not need to read the complete document.

The main benchmark tool that we used is a modified version of Sun's XMLTest. It lets you define test suites that describe which parsers are tested with which documents. On execution, it measures how many documents a parser processed in a specified period of time, and calculates the throughput per second for it. The most modification involved the inclusion of the external C benchmarks into the tests. Those benchmarks were inspired by the xmlbench benchmark tool, which is under the GNU public license. All C tests in the benchmarks of this part of the series used the GNU GCC compiler. Each Java benchmark was executed with the -server option to reserve more resources for the JVM. All tests were run on a Fujitsu Siemens S Series notebook, with a 1.70 GHz Intel processor and 1 GB RAM.

The aim of our benchmarks was to measure how many documents a parser can process in a given time. Processing means that the parser walks through the whole document and counts the number of elements, attributes, and the length of the text elements. This way we were able to see if each parser performs the same walk through the document. We measured the throughput for 15 seconds with a 5 second warm-up phase for each parser. XMLTest presents the results as bar charts with the throughput per second on the Y axis, and the different parsers on the X axis. The XML documents which we used are purchase order XML files that are provided with XMLTest. These documents have a maximum depth of 6, and an almost equal amount of elements and attributes.

First, we will show you the benchmark results for the push-parsers and one StAX implementation. 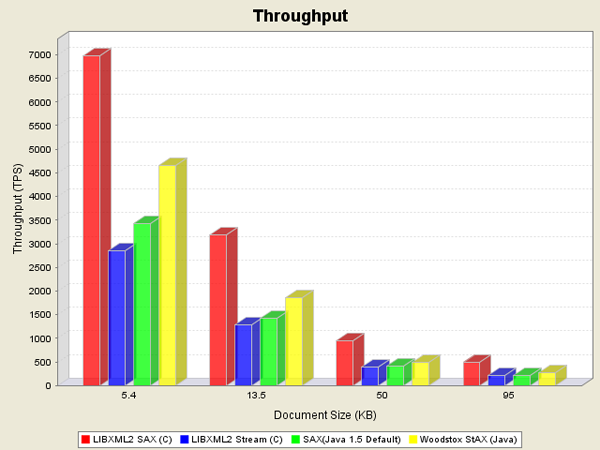 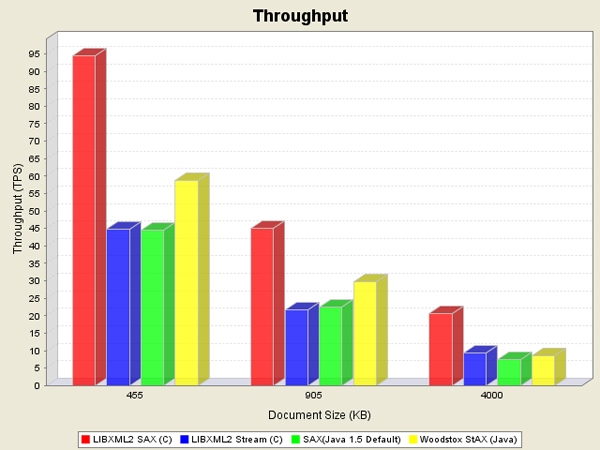 You can choose the StAX implementation (for example Apache's AXIOM) in many recent Java XML applications. Since there are already a handful of StAX implementations out there, we compared their reading performance in the following benchmarks. 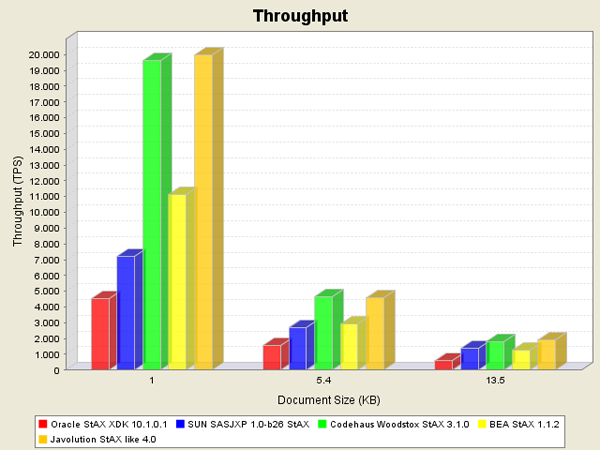 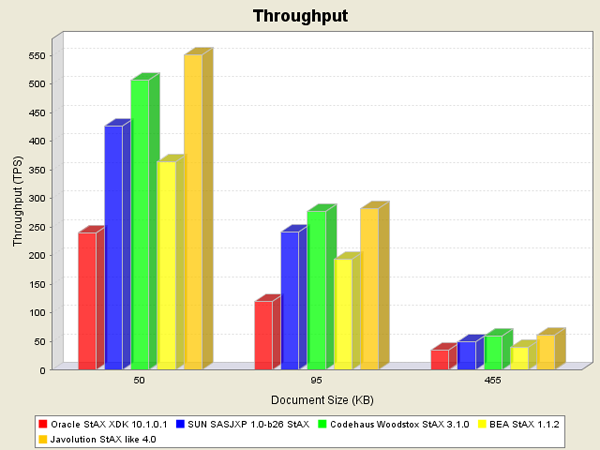 Figure 4: Benchmark results for the StAX parsers and medium-sized documents 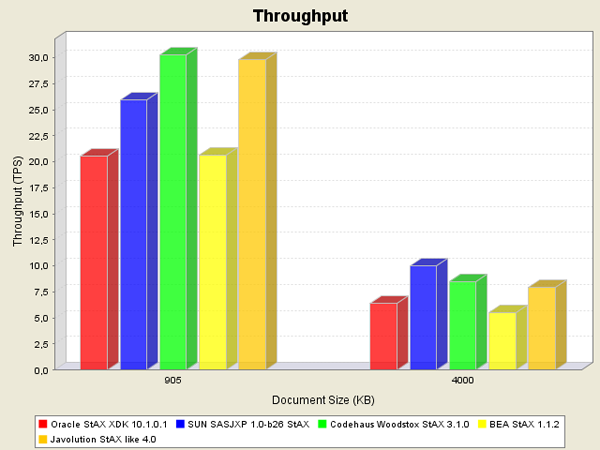 Figure 5: Benchmark results for the StAX parsers and large documents

From the results of the benchmarks we can see that there are big performance differences between the parser implementations. Overall the SAX-like implementation of LIBXML2 in C performs best in all benchmarks. For most document sizes it had one-third to twice as much throughput as its competitors. This is interesting because as we will see in the next part of this series, the LIBXML2 DOM implementation in C uses this parser to read in data and therefore already has a performance advantage over the other object model parsers in Java. A negative point of this parser is definitely the complexity of its interface. With the need to handle void, and double pointers in the callback interface, it is a great difference to the rather intuitive use of the Java StAX interfaces.

Javolution and Woodstox are the winners of the StAX parsers. Woodstox has the advantage of being JSR 173 conforming StAX parser, which makes it usable for more applications.