XML is now acknowledged as the best format for authoring technical documentation. Its wide support, extensible nature, separation of form and content, and ability to publish in a wide variety of output formats such as PDF, HTML, and RTF make it a natural choice. In addition, the costs associated with implementing an XML publishing solution have decreased significantly. Nevertheless, there are some clear do's and don'ts when authoring in XML, some of which are detailed in Coping with Babel, a paper from the XML 2004 conference.

XML, thanks to its extensible nature and rigorous syntax, has also spawned many standards that allow the exchange of information between different systems and organizations, as well as new ways of organizing, transforming, and reusing existing assets. For publishing and translation, this has created a new way of using and exploiting existing documentation assets, known as Open Architecture for XML Authoring and Localization (OAXAL).

OAXAL takes advantage of the arrival of some core XML-related standards:

DITA is a very well thought-out way of introducing object-oriented concepts into document construction. It introduces the concepts of reuse and granularity into publishing within an XML vocabulary. It is having a big impact on the document publishing industry. 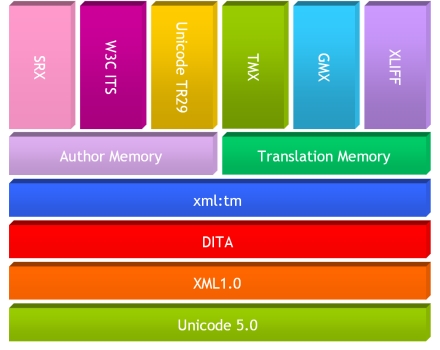 The OASIS DITA (Darwin Information Typing Architecture) Standard has certainly raised the profile of XML in the technical authoring field. It has done so for two reasons:

The original architects of DITA looked at the most effective way of writing technical documentation and came to the conclusion that a topic-based authoring approach was the best way of achieving this. Rather than writing a publication as a monolithic set of chapters, they found that deconstructing a publication into a set of topics was a far better way of creating technical documentation. It meant that authors could work independently on their own topics without impeding one another. It also meant that topics could be reused across many different publications. DITA is also an excellent way of authoring web-based and other types of electronic documents, such as Help topics, as it encourages greater granularity. The core messages of DITA are granularity and reuse. 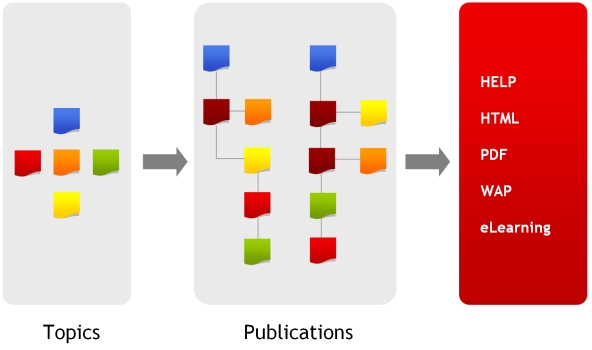 The topic concept provides DITA with a built-in component model that can be readily understood and implemented: write once, translate once, reuse many times. There are many analogies to this approach in the automotive industry, where the same components are reused across many model ranges. This substantially reduces costs and increases the availability of spare parts. Having a DITA document for discrete operations, such as the removal of a cylinder head for a given engine type, means that this procedure can be reused across all of the publications relating to models that share that engine.

DITA also comes with a built-in concept of extensibility. The original DITA architects realized that topics can have different formats, and that not all topics are equal, so they worked out an extension mechanism that allows topics to be specialized. The standard DITA "topic" is available in the form of the three most common implementations:

These can then, in turn, be specialized further, so "Task" can have "Maintenance Task" and "Repair Task," "Disassembly Task" and "Assembly Task" specializations using the simple DITA extension mechanism.

Elements in the new specializations can share typographical characteristics of their forebears even though they may be called by a different name. 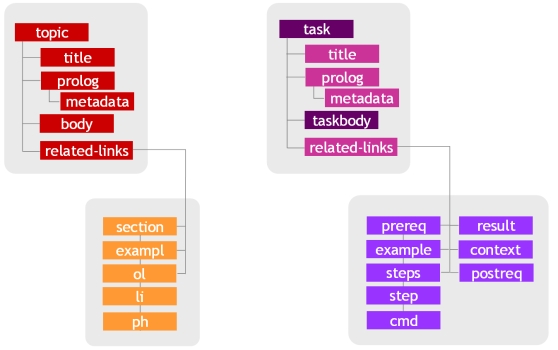 By providing a ready-built toolkit for the construction of technical documentation, DITA substantially reduces the cost of implementation. DITA comes with a prepackaged set of tools to construct books and manuals as well as complex web-page structures for free from the DITA Open Toolkit SourceForge site.

In order to put together a publication from individual topics, DITA uses the "bookmap" concept. A "bookmap" allows the publisher to decide which topics go into a given publication. 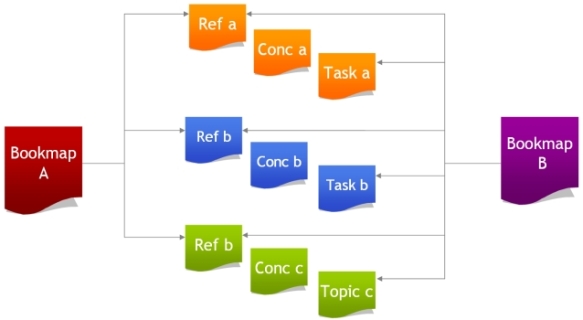 DITA allows conditional processing depending on the attribute values for given elements. In the above example, the "p" element will only be published if the environmental variable "audience" has the value "administrator". Likewise, the "li" elements will only be published if the relevant "product" and "platform" attributes have the required settings.

One of the main benefits of DITA from the standardization point of view is that most of the work regarding the XML Schema construction has already been done for you. Previously, introducing a custom built XML Schema would have entailed lots of work and the associated costs of hiring a consultancy or specialist. DITA provides a ready-made, pre-built generic XML environment for authoring and publication. The full DITA Open Source Toolkit provides transformations for HTML, PDF, and RTF output as well as many other utilities and examples. The other benefit of standardization is that there is extensive support now available from XML editors and content management systems for DITA, making implementation simpler and cheaper. In addition, there has been a rapid build up of Documentation, Training, and Consultancy resources for DITA. All of these make for easier and cheaper implementation.

If your existing documentation is already in a "topic" or "task" type format, then moving to DITA should be relatively simple as long as there is direct mapping between the existing elements used and DITA elements. It may even be possible to develop a specialization of the existing DITA into the incumbent element names and attributes. Another factor that makes the move to DITA easier is if your existing documents use the CALS table model that DITA supports.

DITA is not only for technical manuals. It can be easily adapted to other subject matter such as eLearning, warranty, or service bulletin publications.

As with all good things, there are some aspects that need to be considered carefully. DITA does have some potential issues that you should bear in mind:

xml:tm is a new LISA standard that is a directly compatible with DITA. It takes the DITA principle of reuse and applies it at the sentence level. Integration with DITA is seamless.

Whereas traditional translation memory systems have only concentrated on the translation aspect of the document lifecycle, xml:tm goes deeper into the process, establishing the concept of "text memory." Each sentence (text unit) in the document is given a unique identifier. This identifier remains immutable for the life of the document. xml:tm uses the XML namespace mechanism to achieve this.

Figure 6 shows how the xml:tm namespace coexists within an XML document: 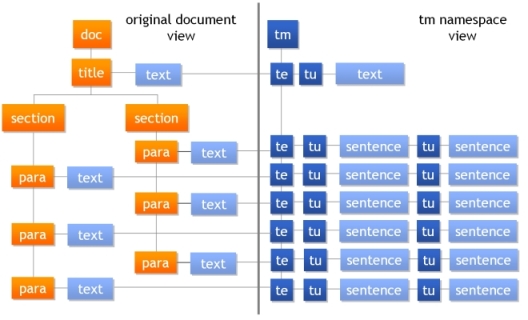 XML namespace is used to map a text memory view onto a document. This process is called segmentation. The text memory works at the sentence level of granularity—the text unit. Each individual xml:tm text unit is allocated a unique identifier. This unique identifier is immutable for the life of the document. As a document goes through its lifecycle the unique identifiers are maintained and new ones are allocated as required. This aspect of text memory is called author memory. It can be used to build author memory systems, which can be used to simplify and improve the consistency of authoring. A detailed technical article about xml:tm has been published on xml.com.

The use of xml:tm greatly improves upon the traditional translation route. Each text unit in a document has a unique identifier. When the document is translated, the target version of the file has the same identifiers. The source and target documents are therefore perfectly aligned at the text unit level. Figure 7 shows how perfect matching is achieved: 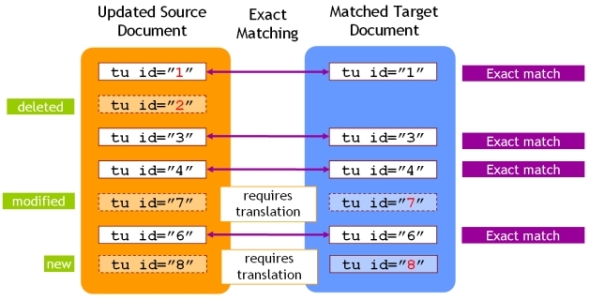 In xml:tm terms, this type of perfect matching is known as in context exact (ICE) matching. The xml:tm concept has been successfully proven within large-scale technical publishing applications.

For authoring, xml:tm represents a systematic way of identifying and storing all previously authored sentences. This repository can then be appropriately indexed and serve as input to authoring tools, to encourage authors to reuse existing sentences where appropriate rather than coming up with different ways of saying the same thing. 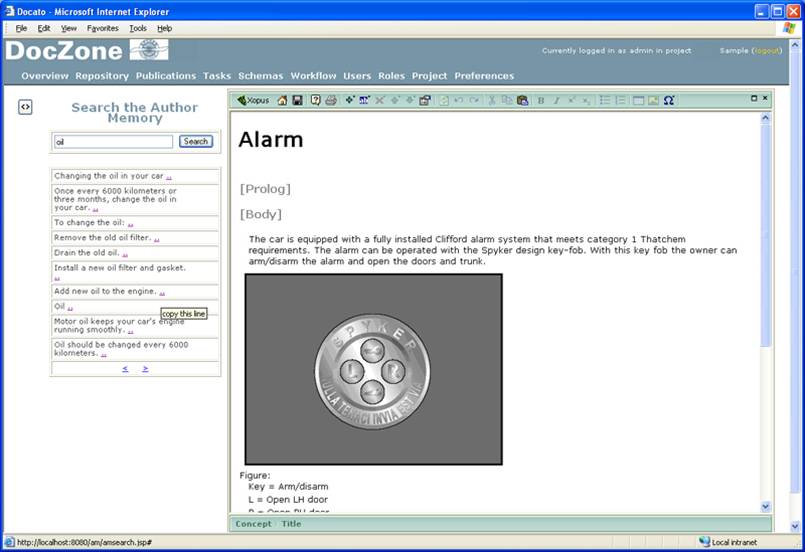 The author can enter keywords and search the author memory for appropriate sentences. If a sentence has already been used, then it is very likely that it has also been translated, in which case a leveraged translation match will be found, further reducing translation costs.

DITA and xml:tm are a perfect fit. While DITA enables reuse at the topic level, xml:tm complements this by enabling reuse at the sentence level. The xml:tm namespace can be seeded transparently into a DITA document. As the document goes through its lifecycle, the unique identifiers of each text unit are maintained, as are modifications to the document. In effect, xml:tm provides a change tracker for the document. The easiest way of implementing this is on the back of a content management system (CMS). Using DITA invariably means investing in an appropriate CMS.

The OAXAL document lifecycle for a DITA document looks like this:

The xml:tm namespace can be made transparent to any editing, printing, or transformation tools by means of a very simple technique.

xml:tm and the Other Open Standards

xml:tm provides a pivotal role within OAXAL, allowing all the other related standards to interoperate within one elegant architecture. 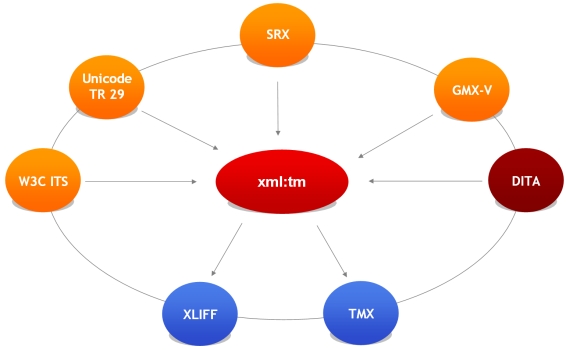 If we look at the authoring aspect of publishing, OAXAL offers the following significant benefits: 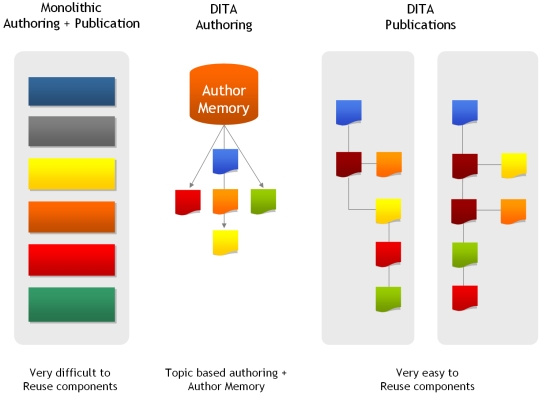 From the translation point of view, OAXAL offers the following benefits: 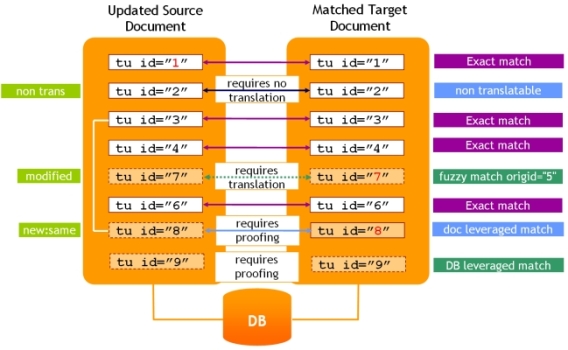 The most significant benefits that OAXAL brings to the translation process are the automation of what previously was a very manual process. Figure 12 illustrates the traditional approach to localization: 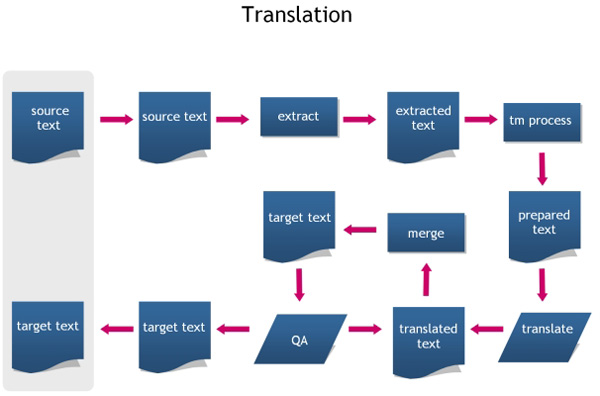 This approach is very expensive. Every red arrow is potentially a point of failure in the workflow. Running such a process requires a lot of project management time and effort, as well as complex manual steps. The costs of running such a system are shown in Figure 13, which demonstrates the typical financial model for localization tasks. 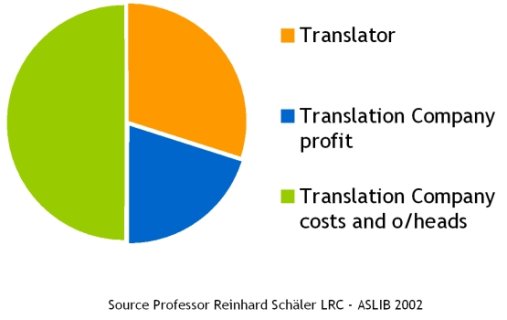 The actual translation in this model accounts for only one third of the localization process. Nearly half of the cost can be eliminated using the OAXAL model, as shown in Figure 14. 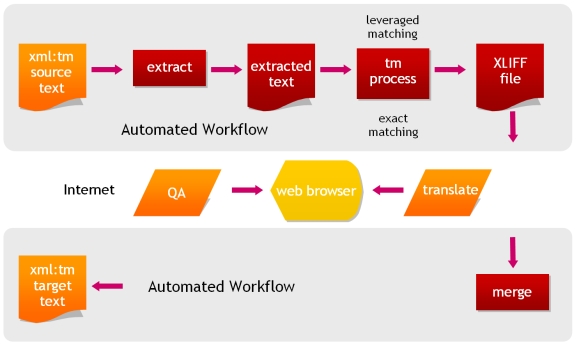