In Part I we discussed how the Web Server Gateway Interface (WSGI) is helping to unify the Python web-framework world by providing a standard API through which different web applications can operate with different servers. We also looked at the HTTP protocol and how to write and deploy WSGI applications. In the second part of this article, we'll look at how to make use of existing middleware components to add functionality to your WSGI applications.

WSGI middleware is software that behaves like a server to an application, passing an environ dictionary and start_response callable to the application in the same way a server would. Middleware components also expect the application to return an iterable, such as a list of strings, or to be iterable themselves. Importantly, middleware also behaves like an application to the server, expecting to receive an environ dictionary and start_response callable itself, and returning an iterable back to the server.

Middleware effectively sits between a server and an application, isolating one from the other, and can therefore do any of the following or a combination thereof:

Middleware is therefore extremely powerful and can build a broad range of discrete components that can be used with different WSGI servers and applications. For example, a middleware component can:

The application stores a variable called value in the session store. On each request, the variable is incremented and a message stating its current value is returned. For this application to work, the environ dictionary needs to contain the beaker.session key, which is provided by the session middleware from the beaker package.

Here's how you would wrap the application in beaker's session middleware:

You can test the example above by serving the finished application with the following code and visiting http://localhost:8000 on your local machine once the server is running:

If you test the example above, you may find the count goes from 1 to 3, missing 2. This is because many web browsers try to retrieve a /favicon.ico file the first time a site is visited, and this request also results in value being incremented. If you have the LiveHTTPHeaders extension for the Firefox web browser installed, you'll be able to see the request being made when you visit a site not already in the browser's cache.

In situations such as the one above where you are using a number of middleware components, it is often more convenient to structure your code like this:

Having a stack made entirely from WSGI middleware has a huge advantage: developers are free to pick and choose the components they need, or even to replace the parts of the stack they don't like by simply changing which middleware they use. If you've ever tried changing parts of the application stack in other framework architectures, you understand how hard it can sometimes be.

During development of an application, it's really useful to be able to debug errors. The first step is to display an error report. To do this, you can use the CgitbMiddleware middleware from the Paste project:

Now if an exception is raised in your application code, a full error report--similar to one shown below--will be displayed. 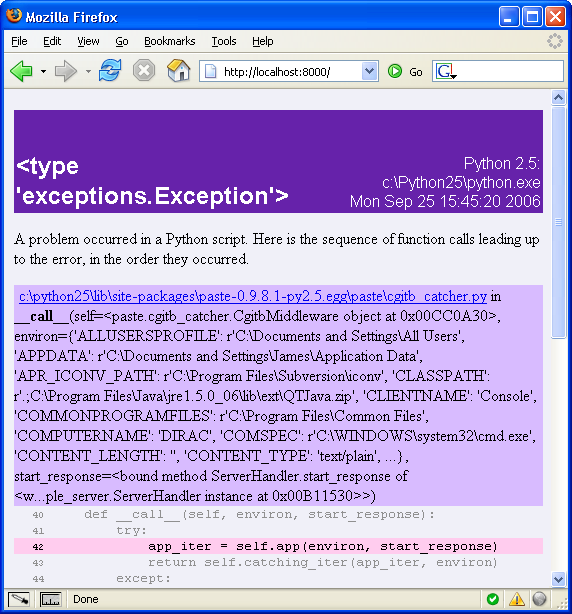 For production deployment, you'd want to disable this facility to prevent a visitor from accidentally being shown the values of important variables, such as passwords that might otherwise be displayed if an error occurred.

While it is undoubtedly useful to have a traceback report, it would be even more useful to be able to interactively debug each part of the call stack up to the point at which the error occurred by using a web-based command prompt. Such a solution already exists and can be added in exactly the same way:

If you run the example above and visit http://localhost:8000, you will see the error report. Clicking on the

icon will give you the interactive debug prompt, and clicking on

will give you a representation of the code at the point that the error occurred. Try entering this at the prompt and press enter:

You will see the Hello World! printed exactly as if it were entered at a normal Python prompt because the middleware acts like a full Python interpreter. You can even use the up and down arrows on your keyboard to scroll through the command history, just as you can at a real Python prompt.

The EvalException middleware also displays the values of local variables and has an extra data button that displays extra information about the environment. The screenshot below shows the middleware in action with the interactive prompt and local variables, including variable1, displayed: 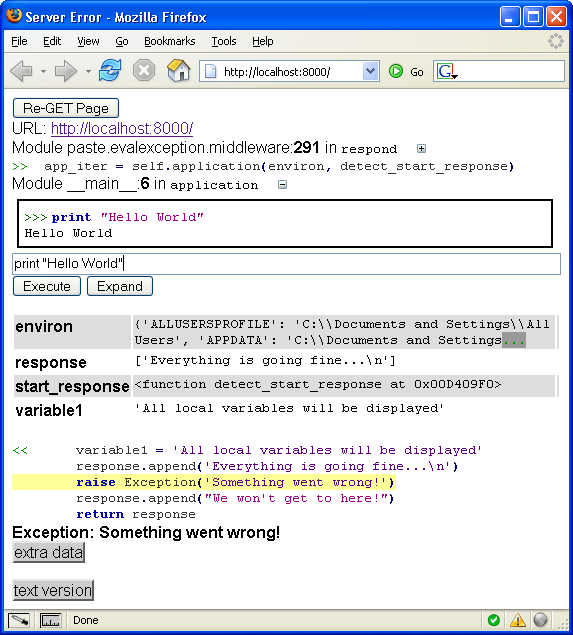 Having this much power makes it much easier to debug applications, but makes it even more important that you disable debugging for production use so that malicious visitors can't execute destructive commands through your debug screen if an error occurred.

Once again, this example shows just how much useful functionality can be added to an application using a single middleware component.

When the Web Server Gateway Interface was being drawn up, there were a number of discussions about how best to deploy a finished application with middleware. Clearly developers couldn't expect non-technical users to directly modify the middleware chains themselves. The most widely adopted solution is to use PasteDeploy. Users configure a config file in a familiar INI-style format, and the desired application--with any necessary middleware--is created by PasteDeploy from that file. PasteDeploy is used like this:

The configuration file can be used to specify server settings, including middleware, and even combine multiple WSGI applications together into a composite application. All the options are well documented on the PasteDeploy site.

The Many Frameworks Problem Revisited

At the start of Part I of this article, we looked at how the WSGI was created to help solve the fragmentation of the Python web community. The WSGI specification also had wider ambitions. PEP 333 states:

"If middleware can be both simple and robust, and WSGI is widely available in servers and frameworks, it allows for the possibility of an entirely new kind of Python web application framework: one consisting of loosely coupled WSGI middleware components. Indeed, existing framework authors may even choose to refactor their frameworks' existing services to be provided in this way, becoming more like libraries used with WSGI, and less like monolithic frameworks. This would then allow application developers to choose "best-of-breed" components for specific functionality, rather than having to commit to all the pros and cons of a single framework."

The WSGI has shifted the point of reuse from the framework itself to individual middleware components. While developers can still create their own solutions to web development problems, as long as they're creating, using, and improving middleware components, the whole Python community now benefits.

I hope this article has demonstrated some of the power of WSGI middleware and will encourage you to make use of the specification and the various projects that already implement it. Here are some useful places to start if you wish to learn more about WSGI programming.