In this two-part article, we will look at what the Web Server Gateway Interface is, how to use it to write web applications, and how to use middleware components to quickly add powerful functionality. Before diving into these topics, we will also take a brief look at why the specification was created in the first place.

The Many Frameworks Problem

Python is a great language for web development. It is straightforward to learn, has a broad and powerful standard library, and benefits from an active community of developers who maintain a range of XML and database tools, templating languages, servers, and application frameworks. In 2003, when the Web Server Gateway Interface specification was drawn up, the Python community also had one major problem. It was often easier for developers to write their own solutions to web-development problems from scratch rather than reusing and improving existing projects. This resulted in a proliferation of largely incompatible web frameworks. If developers wanted a full and powerful solution, they could use Zope, but many of them coming into the community in search of a lightweight framework found it hard to know where to start.

Developers within the Python community quickly recognized that it would be preferable to have fewer and better-supported frameworks, but since each framework had its strengths and weaknesses at the time, none stood out as a clear candidate for adoption.

In the Java world, the servlet architecture meant that applications written with one framework could run on any server supporting the servlet API. The Web Server Gateway Interface (often written WSGI, pronounced "whiskey") was designed to bring the same interoperability that the Java world enjoyed to Python, and to go some way toward unifying the Python web-framework world without stifling the diversity.

The full specification is defined in PEP 333. (PEP is an acronym for Python Enhancement Proposal.) The abstract of the PEP sums up the specification's goals very clearly, stating:

Most Python web frameworks today have a WSGI adapter, and most server technologies (Apache, mod_python, FastCGI, CGI, etc.) can be used to run WSGI applications, so the vision of web-application portability is fast becoming a reality.

It is very useful to be able to see the HTTP information being sent back and forth between a web browser and a server. One good tool for doing this is the LiveHTTPHeaders extension for the Firefox web browser which, when loaded, is visible in the sidebar and displays the HTTP information sent and received on each request. Once it's installed, you can select View->Sidebar->LiveHTTPHeaders from the menu to load the extension in the sidebar.

When you request a page, the browser sends an HTTP request to the server. When the server receives that request, it will perform some action (typically running an application or serving a file) and return an HTTP response. Below is the HTTP information sent when visiting the PEP 333 page: 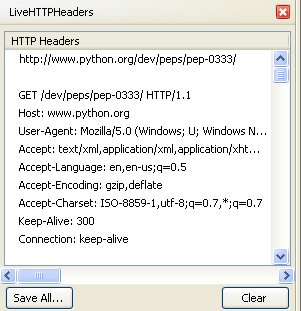 and here is the response returned:

Here is a simple CGI application that would produce a Hello World! message in the browser:

At first glance, this looks a little complicated, so let's think about what information a server needs from an application and vice versa. First of all, an application needs to know about the environment in which it is running. In a CGI application, you can obtain this information with this code:

In a WSGI application, this information is supplied directly by the WSGI server as the first parameter to the application callable; in our example above, this parameter is named environ.

The server also needs to know the status and headers to set before any content is returned to the browser, so it supplies a second argument to the application -- a callback function taking the status and a list of tuple pairs of headers as arguments. In our example, it is named start_response. Our application calls start_response() to set a status of 200 OK, which means everything went fine, and to set the Content-type header to text/html.

These requirements for applications can also be met by generators, classes that override the __call__() method or the __iter__() method. It is possible to use these as WSGI applications instead of following the example above and using a simple function.

The WSGI specification also discusses a third parameter to start_response() named exc_info, used in error handling, and a writable object returned by start_response(), used for backward compatibility -- not for use in new applications or frameworks. (We do not need to worry about these details, but they are mentioned for completeness).

We will start by running our test application as a CGI script. Create a new file named test.py and add the following to it:

If you are running a version of Python prior to 2.5, you will need to download and install the wsgiref package. You can do this by extracting the wsgiref-0.1.2.zip file (or most recent update) and executing the command:

You can then run the test application from the command line to see what information it outputs:

You will see the following:

Notice that the CGIHandler has acted the way any other CGI server would, and added the Status and Content-Length to the output.

You can also run this same, unmodified application on all other WSGI-compliant servers.

We've seen how to write a simple WSGI application and deploy it as a CGI script or use it with FastCGI, but to write any real application, we'll need access to the environment. This is provided by the first parameter passed to the application by the server, the environ dictionary.

This example serves the application using a standalone server. If you run this example, you will be able to see the output from the application by visiting http://localhost:8000. You will notice that environ contains all the usual keys you would expect to see in a CGI environment, such as PATH_INFO, REMOTE_ADDR, etc. It also contains the Web Server Gateway Interface keys wsgi.errors, wsgi.file_wrapper, wsgi.input, wsgi.multiprocess, wsgi.multithread, wsgi.run_once, wsgi.url_scheme, and wsgi.version, which provide information about the WSGI environment. The use of these variables is described in the environ variables section of the specification.

The wsgi.errors key contains an output stream (filelike object). Any information written to the output stream is sent by the server to its error log. This can be useful for debugging purposes, as well as issuing errors or warnings, and it can be used like this:

Adding this line to the example above, restarting the server, and refreshing the page outputs the message to the console as expected:

From the information in environ, you can build any web application, and tools already exist to simplify common tasks, such as extracting the variables submitted in a form from the QUERY_STRING or rebuilding the original URL. Have a look at Paste for the lower-level tools or Pylons for a full WSGI framework.

The environ dictionary can actually contain one other type of key: a key defined by the server or a middleware component. Such keys are named using only lowercase letters, numbers, dots, and underscores, and are prefixed with a name that is unique to the defining server or middleware. In Part II of this article, we will look at WSGI middleware and how to add it to existing applications. We will also see an example of a middleware component that adds a key to the environ dictionary to provide session functionality to an application.