Most web applications have a requirement somewhere in their interface for a tabular view of data -- often, a view of the rows in a database table. In some cases, the use of a static HTML <TABLE> is appropriate, but users have become increasingly accustomed to richer, more malleable interfaces that let them change column widths, order, etc. Among the application widgets in the web developer's toolbox, the dynamic datagrid is an often cumbersome one to set up. This article will outline a datagrid component powered by XSLT and JavaScript that aims to achieve easy setup, high performance, and minimum dependence.

There are roughly three types of approaches to using a JavaScript widget in a web application. Approach #1 involves creating a server-side object with properties (in PHP or Ruby, for instance), and then eventually calling a render method on the object that creates a XHTML string to be sent to the browser. For instance, in PHP it might look something like this:

Approach #2 is much like approach #1, except that an object is instantiated in the browser (with JavaScript), and the render method is essentially a series of Document Object Model (DOM) object creations and attachments to the browser's render tree. For example, using the ActiveWidgets Grid, the code might look like this:

Approach #3 is a combination of approaches #1 and #2, whereby some relatively simple, declarative XHTML is used as a starting point, and some method is used to populate the render tree with extra bells and whistles. An analogy here is building a house where the declarative XHTML is the frame and the DOM additions are the siding, air conditioning, and champagne-filled hot tub!

Approach #1 to widget creation is the least portable, as it relies on whatever server-side language a developer is using at the time. Approach #2 will most likely degrade poorly if an end-user has disabled JavaScript in his browser; this approach also tends to perform less reliably with larger datasets. Thus, compromise -- the mother of endless tinkering -- will be our guide to Approach #3.

In Defense of the Table Tag

The advent of added and better Cascading Style Sheet (CSS) support in browsers has caused developers to reconsider their use of the <TABLE> tag. For the most part this is a great thing, as tables can be constraining and inefficient for design and layout. However, the <TABLE> tag and its children offer a declarative, semantic language for describing the presentation of tabular data that succeeds where an obscure combination of nested DIVs and float:lefts becomes cumbersome. And if a user agent has CSS disabled, the pure DIV approach to table presentation will be a mess.

XSLT offers developers a mechanism for decorating the DOM that ensures well-formed markup and is both powerful and flexible. XSL transforms for UI widgets must be followed by a call to put the resultant XHTML back into the DOM being rendered. The XSLDataGrid uses its container's innerHTML property to do so (this is a technique known as AHAH [2]). It is worth noting here that many argue against using the proprietary, but well-supported, innerHTML property to populate the DOM. In an article entitled "Benchmark - W3C DOM vs. innerHTML", the ever-invalueable quirksmode.org has this to say about tables specifically:

The most obvious conclusion of these tests is that innerHTML is faster than "real" W3C DOM methods in all browsers. The W3C DOM table methods are slow to very slow, especially in Explorer.

More than once people said that creating elements only once and then cloning them when necessary leads to a dramatic performance improvement. These tests don't show anything of that kind. Although in most browsers cloning is minimally faster than creating, the difference between the two methods is small.

So what does the picture look like with XSLT for widget instantiation? The following diagram shows how the XSLDataGrid works.

Dual-DOM, or, How I Dealt with innerHTML

There are essentially three ways to use the XSLDataGrid component:

In case 1, we don't really have to worry about keeping up with the DOM in the client, since we can farm off all the change operations (column resize, sort, and reorder) to the server, re-filling the container's innerHTML each time. Cases 2 and 3 are different, because we want to perform XSLT multiple times -- in other words, we will continue to need some valid XHTML on which we can perform XSLT. It's important to note that with innerHTML, what you put in is not necessarily what you get out when you read it. Internet Explorer, for instance, does some major "optimization" to the HTML, removing quotation marks, end tags, etc. Because we cannot quickly and reliably get well-formed XHTML from the container's innerHTML, when the XSLDataGrid initializes, it saves an XML DOM Document made from the original semantic XHTML in memory (aka Dual-DOM). It's also usually easier and more efficient to update this simpler XML DOM when we want to perform change operations than it would be to update the more complex, decorated DOM in the render tree. Let's take the example of resizing a column. Updating the DOM in the render tree would mean updating a great number of the DIVs, SPANs, THs, TDs, COLs etc., all the while taxing our client to render these changes as they're made. In the XML DOM, we change one width attribute's value and then re-run the XSLT. This approach allows us to do all of the "heavy lifting" in our XSLT engine -- get the presentation rules right once in XSL and then leverage it.

XSLT in the Browser

Internet Explorer and Firefox both offer exposed APIs for XSLT, and Manos Batsis has released a free software JavaScript library named Sarissa that wraps up the whole process of loading the XHTML and the XSL, and then calling the browser's native transform method. At the time of this writing, it appears that XSLT is not exposed to JavaScript in Safari or Konqueror. Support for Opera's XSLT API is not yet implemented in the XSLDataGrid.

Client-side sorting is done in the XSLDataGrid by first using DOM to strip out a subset of template nodes from the original XSL file. Then, the current TBODY content is transformed using this subset of the nodes along with a few param sets, and voila! Unfortunately, this sorting technique is limited to the datatypes recognized by XSLT 1.0, which are only "text" and "number." "date" would be pretty useful, and I suspect that I'll work on additional qname stylesheet templates to handle other sort cases in the coming weeks.

Depending on the iterative nature of your transform or the development cycle in your product, it might make sense to offload the XSL transform to the client. To get a sense of how this performance scales with the XSLDataGrid, take a look at the following metrics table, which was created with some help from the Venkman profiler on my laptop. The server-side metrics are from a GNU/Linux machine with PHP 5.1.4. The client test machine is a 2GHz Pentium M running Mozilla Firefox 1.5.0.6. 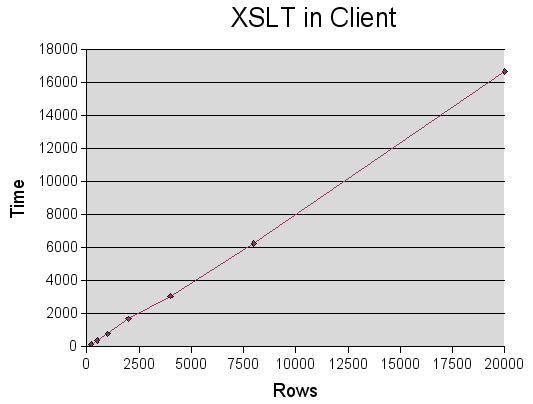 The greatest advantage to using XSLT for a JavaScript widget is the flexibility it provides for instantiation. Most Ajax-using web developers will be working with a server-side component/language, and having the option to reduce a client-side JavaScript decoration step to improve performance is nice, though it comes with a bandwidth price. In many projects, developers may be faced with a mixed bag: they may have a need for some large dynamic datagrids, which can only be originated on the server, as well as some smaller hand-coded tables, where a less-rich datagrid would be fine. For instance, developers might not always want to capture the fact that a user changed a column's size and store it as a preference, but even for these less-rich datagrids, developers do want them to look and feel the same. The XSLT approach gives the developer an opportunity to choose either a client- or server-based technique to achieve a similar result.

Instantiation in JavaScript of the XSLDataGrid is done in much the same way as functions are in Prototype and Scriptaculous.

Skeleton of required base markup:

In the above skeleton, you'll need to fill in width, height, id, and class. Having those width and height values will also help in case JavaScript is disabled in the client.

data-type is optional for client-side XSL sorting. Right now the client-side sort technique is purely XSLT (only number and text sorting). I've not written any special sort routines for other (qname) datatypes, like dates, but I welcome suggestions.

Currently, width and height must be numbers (in pixels), as opposed to percentages.

THEAD/TR/TH class: You can use all or any of the following per column:

[1] Examples/resources for using XSLT on XHTML