XML 2004: From the Exhibition Floor

XML's ubiquity and the slowing of the standards cycle meant that there were a lot fewer vendors promising something completely new and different at the XML 2004 exposition, but a lot of projects and products have reached maturity. It was delightful to see more demos working as expected and to find a lot of XML technology that's been in the works for years being presented as concrete products.

I didn't come to XML 2004 looking for MathML, and there wasn't much mention of it on the program, but it was a regular feature on the showfloor. In some cases, it was a company's primary reason for being here, while in others it was one aspect of a larger story.

Among those here for the math was Wolfram Research, best-known for its Mathematica product, which has always amazed me by its astounding range of mathematical possibilities. Mathematica has supported MathML for a while now, but Wolfram was here to show off Publicon, a $149 spinoff from the $1800 and up Mathematica package. Publicon is a typesetting tool for authors creating technical documents. It supports a wide range of equation formats, exports to TeX, imports and exports MathML, and manages part of technical documents like citations, endnotes, and bibliographies.

Also showing MathML for typesetting, but in the context of Adobe InDesign and InCopy document layout, was i.t.i.p. Their InMath tool supports the creation of MathML inside these programs, using a plug-in approach that integrates tightly with InDesign's own GUI. Ferdinand Schwörer showed me how to create an equation in InMath, export it to Mathematica, do calculations, and bring it back into InDesign.

Design Science, which has been working with equations and MathML for years, was showing off its MathType 5, WebEQ, MathFlow, and the free MathPlayer MathML plug-in, focused largely on their use in publishing. Miles 33 was presenting its OASYS Professional Publishing System, which also features support for MathML.

XML developers who want to integrate MathML with their XSL-FO will be happy to hear that Antenna House has upgraded their MathML option to present equations as vector graphics, improving the quality of their rendering. I was also happy to see that Antenna House has introduced a "Lite" version of their XSL Formatter, limited to 300 pages of left-to-right text and missing a few other features. Definitely, $300 is a more appealing starter price than $1250.

XHTML also appeared on the floor. HTML's ubiquity means that most vendors have an HTML story they can tell, but ATL Systems has taken XHTML 1.1 Modularization seriously and produced a set of document creation and management tools around it. I was happy to see that they're taking advantage of the RELAX NG versions of the XHTML modules, as well as Asami Tomoharu's RELAX schema compiler tools.

Off the show floor, Justsystem was demonstrating their XFY platform for editing compound documents. For examples, they were using XHTML, SVG, and (once again) MathML, using a plug-in architecture that let them edit documents containing nested instances of these vocabularies. The system, which is still in development, is also extensible using Java for hard problems where a vocabulary needs a completely new interface and XSLT plus a new "Vocabulary Connection Descriptor" (VCD) for easier cases where one vocabulary can be mapped to another.

BlastRadius was showing off the latest version of XMetal, which continues the product's tradition of highly configurable XML editing despite the transfer of the product from SoftQuad to Corel to BlastRadius over the last few years.

A number of vendors were here to talk about XQuery, but XQuery seems to be stuck in the same "next year, maybe" mode that it's stayed in for the past few years. DataDirect was showing its XQuery technologies as well as other tools for connecting XML and database systems. Across the aisle, Mark Logic was displaying its Content Interaction server, designed to store large volumes of documents and make them accessible through XQuery. They've posted a limited version that supports up to 50MB of data and one CPU.

The Atom folks also have a work in progress. Joe Gregorio presented on the Atom API yesterday, and the Atom crew spent a lot of time on the exhibit floor, working at a hackathon station. Sometimes you can walk through the exhibits and actually find products being made. 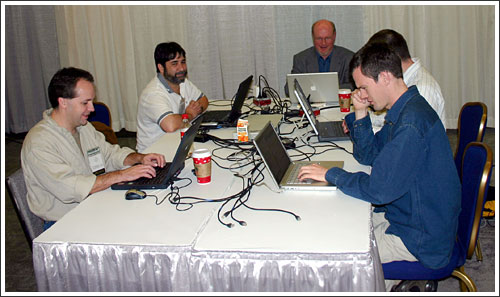