In the second part of our discussion of SVG and typography we explore some time-honored practices of typographic excellence; as we go along, each “type issue” will lead to the discussion of relevant technical aspects of SVG. The typography issues covered are listed below. Beside each one of them is the associated technical SVG issue discussed:

“The devil is in the details,” details such as the quotes surrounding the previous phrase. 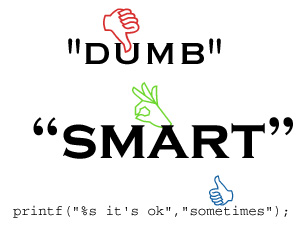 There are two kinds of quotes: “straight” or “dumb” quotes and “curly” or “smart” quotes. As you can see in Fig. 1 on the left, using smart quotes gives the text a professional look. This is because the paired quotation marks are specifically designed for each font, unlike the neutral “dumb” marks which are often considered a faux pas in professional typesetting.

The common misuse of dumb quotes is just the most popular version of a larger problem: using characters which are not appropriate but are similar to the correct ones and easier to input with a keyboard. For some, this problem is taken care of by their editing software like MS Word, which automatically will convert straight to curly quotes; but since a large part of SVG development is manual or the output of our custom software, we cannot afford to hope the editor will fix it. We need to understand the details of how these characters are included.

There are several reasons for using numeric character references in SVG instead of other methods such as HTML character entity references. Let's examine them briefly:

Now that we know the how and why of inserting special characters in SVG, lets go back to typography and some variations of the bungled curly quotes syndrome, including single quotes, hyphens, and ellipses.

The SVG graphic in Figure 3 and its associated code illustrate the points above.

Before moving on, a word of caution about smarts quotes: always use curly quotes except when showing code. String literals in programming languages, attributes in XML, and other such technical code is only correctly presented in dumb quotes, the way it would compile/parse. Using curly quotes to show code is not only incorrect but looks cluelessly affected, roughly similar to eating a Snickers bar with fork and knife.

So far, we have avoided the problem of character availability in specific typefaces by using typefaces such as Arial which are available in most computers; now we need to see how to embed fonts if we are to create specific work that can be reliably displayed in all SVG-compliant viewers. For this purpose, SVG provides a font tag that describes “SVG fonts”, which are collections of font outlines described in SVG paths.

Our three goals regarding fonts are to see how an SVG font can be embedded, to note a couple of important extra sub-elements such as missing-glyph, and finally to see how to convert True Type Fonts into SVG fonts.

An SVG font is embedded in a document via the font tag. Inside the font tag, there is information about the name of the font, an ID we can use to reference it, and the definition of each glyph.

The following Listing shows how to embed the font “Space Toaster” by Chank Diesel (originally designed for the Cartoon Network's “Space Ghost Coast to Coast”). Note how we only need to embed the glyphs for the characters we are going to use.

As you can see in the code above, each glyph is defined separately, using the glyph element. Now when we use the font in any text element, the correct glyphs will be shown as demonstrated in the graphic below (the glyph definitions have been omitted from the listing to avoid repetition). This selective inclusion of characters allow us to keep the file as small as possible. On the other hand, if we use a character that is not defined in the SVG font, the figure defined by the missing-glyph element will appear:

Note that there is more metadata about the font encoded as attributes in the font element. For details about these attributes you can refer to the SVG specification, in particular section 20 (Fonts); however, normally these are values you don't concern yourself with, they are generated by the tools we use to create the SVG font from True Type.

Currently the best known tool for the generation of SVG fonts is Apache Project's Batik. Batik has a very simple command-line utility that allows you to create SVG Fonts from a True Type font.

Batik can bedownloaded at no cost. Using Batik's ttf2svg utility is a very simple process that can be summarized by the following invocation which creates an SVG document with the SVG version of a font called “Hollywood Hills”, giving it the id HollywoodHills, saving it to the specified file, including a testcard, that is text elements with each converted glyph:

A final word of advice: although it's very easy to create SVG fonts from True Type you must be careful to check you have permission to do so. Most great fonts are not free.

So far we've talked about characters outside the Latin alphabet as an exception, in which case we have recommended hexadecimal numeric references. But what if your SVG document is contains a large portion of text in some other script, like Cyrillic or Hebrew?

There are three main technical issues associated with type in the non-latin SVG content scenario: appropriate fonts, encodings, and bidirectionality.

To include large portions of non-Latin text in SVG documents, we have two options: the first one, the legitimate one, is to use the correct characters and specify a font that has glyphs for them. The second option is to use Latin characters with a font that matches Latin characters to non-Latin glyphs (e.g. you write in your XML document an “X” and it shows the Cyrillic glyph “Ж”). The second option is a bad hack that you should avoid completely as it goes against the notions of search, select, and copy available through SVG.

Without the right characters, all the niceties of SVG -- being indexable by search engines, and searchable within the browser -- are lost. If one is to cheat with the original characters, one might as well put a JPG with the rasterized glyphs.

The good news, on the other hand, is that many great―and free―fonts have support for non-Latin scripts. Take for example the following SVG document which uses the Cyrillic support of Arial to show Russian text:

Note how the SVG source above uses real Cyrillic characters to write the Russian slogan, which in turn is real, selectable text in the final display (that is if your system has an Arial font that supports Cyrillic characters, otherwise you will likely see only a question mark). To see the nice side-effects of using real text try selecting the text and copy/pasting it to an application such as MS Word. Search engines can benefit also from the fact that is real text to index and search it. By the way, in case you are curious, the tagline reads “How did they ever make a film about Lolita?”

Since we talk about including non-Latin characters directly in SVG we must talk of encodings. I'm confident you know XML documents can be written in a variety of encodings such as US-ASCII, UTF-8, and ISO-8859-1 and the encoding of your document must match the value specified in the XML declaration (e.g. <?xml version="1.0" encoding="utf-16"?>). The real question for our discussion is: “which encodings are supported by SVG implementations?”, or in other words “which encodings can I reliably use?”

The answer may be affected by the viewer you are expecting to use, but for the sake of portability you should limit to UTF-8, UTF-16, ISO-8859-1, and US-ASCII. These are the encodings supported in versions 2.0 and 3.0 of Adobe's SVG viewer, they are also supported in Batik, and can be reasonably expected in all other future implementations.

So far we've used scripts like Latin and Cyrillic which have a left to right direction. It is important to briefly discuss, however, typesetting of scripts written right to left like Arabic or Hebrew, and how to deal with them in mixed-language environments.

The short version of the story is that this is something well handled automatically and a bad idea to tinker with. More precisely, Unicode defines (in section 3.12, page 55 of the 3.0 print copy) a very precise way to deal with directionality which includes an implicit mechanism based on the characters used and the possibility to override it using the characters RLO (right to left override) and LRO (left to right override).

Unicode provisions for directionality are complex and work consistently well in most scenarios. If you should ever need to override the defaults (I don't recommend it even for aesthetic design purposes), the way to do it is via the direction and unicode-bidi properties, as shown in the graphic below:

The moral of the story is to not complicate matters when dealing with bidirectional text unless you really have a reason to override Unicode's solid provisions. To explicitly override the Unicode bidirectionality algorithm in SVG, specify your desired direction (ltr or rtl) and set unicode-bidi to bidi-override.

To wrap this section, lets review two other important problems with characters and their issues inside SVG. The types of characters we will discuss are: ligatures and the euro sign

Ligatures are one of the favorite tools used by typographers to make text readable and beautiful. A ligature is a special character that mixes two or three characters like ‘f’ and ‘i’ to produce a more visually appealing combination, in this case ‘ﬁ’.

Depending on the script used you will have different examples of ligatures, but lets assume you are working with latin characters, in which case the most common and important ligatures are the f-ligatures. The f-ligatures are specified in unicode in characters U+FB00 through U+FB05. The following graphic illustrates their use: ﬀ

Unfortunately, as you can see in figure 7, support for ligature characters is limited even in very popular fonts. To correctly display all ligatures you will probably need to use the embedded fonts mechanism as described in the Fonts section.

The Euro sign was introduced to Unicode in 1998. Its point is U+20AC, so its hexadecimal numeric reference is &#x20AC; (which displays like this: €).

This concludes the second part of our exploration of SVG and typography. All the examples from this installment can be downloaded in this zip

What is Ahead:The Bells and Whistles

In the first two articles of this series we have dealt with necessary type basics that every SVG developer should know about. Next will be time for the bells, the whistles.

The final two articles of this series deal with techniques to make effects on both static and animated type. There is plenty more fun ahead so stay tuned and see your SVG grow.