An Introduction to Schematron

The Schematron schema language differs from most other XML schema languages in that it is a rule-based language that uses path expressions instead of grammars. This means that instead of creating a grammar for an XML document, a Schematron schema makes assertions applied to a specific context within the document. If the assertion fails, a diagnostic message that is supplied by the author of the schema can be displayed.

One advantages of a rule-based approach is that in many cases modifying the wanted constraint written in plain English can easily create the Schematron rules. For example, a simple content model can be written like this: "The Person element should in the XML instance document have an attribute Title and contain the elements Name and Gender in that order. If the value of the Title attribute is 'Mr' the value of the Gender element must be 'Male'."

In this sentence the context in which the assertions should be applied is clearly stated as the Person element while there are four different assertions:

It has already been mentioned that Schematron makes various assertions based on a specific context in a document. Both the assertions and the context make up two of the four layers in Schematron's fixed four-layer hierarchy:

This introduction coves only three of these layers (patterns, rules and assertions); these are most important for using embedded Schematron rules in RELAX NG. For a full description of the Schematron schema language, see the Schematron specification.

The three layers covered in this section are constructed so that each assertion is grouped into rules and each rule defines a context. Each rule is then grouped into patterns, which are given a name that is displayed together with the error message (there is really more to patterns than just a grouping mechanism, but for this introduction this is sufficient).

The following XML document contains a very simple content model that helps explain the three layers in the hierarchy:

The bottom layer in the hierarchy is the assertions, which are used to specify the constraints that should be checked within a specific context of the XML instance document. In a Schematron schema, the typical element used to define assertions is assert. The assert element has a test attribute, which is an XSLT pattern. In the preceding example, there was four assertions made on the document in order to specify the content model, namely:

Written using Schematron assertions this would be expressed as

If the condition in the test attribute is not fulfilled, the content of the assertion element is displayed to the user. So, for example, if the third condition was broken (*[1] = Name), the following message is displayed:

Each of these assertions has a condition that is evaluated, but the assertion does not define where in the XML instance document this condition should be checked. For example, the first assertion tests for the occurrence of the attribute Title, but it is not specified on which element in the XML instance document this assertion is applied. The next layer in the hierarchy, the rules, specifies the location of the contexts of assertions.

The name of the pattern will always be displayed in the output, regardless of whether the assertions fail or succeed. If the assertion fails, the output will also contain the content of the assertion element. However, there is also additional information displayed together with the assertion text to help you locate the source of the failed assertion. For example, if the co-occurrence constraint above was violated by having Title='Mr' and Gender='Female' then the following diagnostic would be generated by Schematron:

By moving some of the logic from the assertion to the specification of the context, the complexity of the rule has been decreased. This technique is often very useful when writing Schematron schemas.

Note that all XPath expressions that test element values now include the namespace prefix ex.

This Schematron schema would now validate the following instance:

There are currently a few different Schematron processors available. In general these processors are divided into two groups: XSLT-based and XPath-based processors.

Since the Schematron specification is built on top of XSLT and XPath, all you really need to perform Schematron validation is an XSLT processor. Validation is then performed in two stages: the Schematron schema is, first, turned into a validating XSLT stylesheet that is, second, applied to the XML instance document to get the validation results. Since XSLT processors are available in most programming languages and on most platforms and operating systems, this validation technique will be explained in more detail in the next section.

For more API-like validators there currently exists two Schematron processors that are built on top of XPath. The first one is a Java implementation by Ivelin Ivanov that is part of the Cocoon project. This implementation can be accessed through the SourceForge.NET website. The second XPath implementation is Daniel Cazzulino's Schematron.NET using the Microsoft .NET platform which is also available at SourceForge.

Schematron processing using XSLT is trivial to implement and works in two steps: 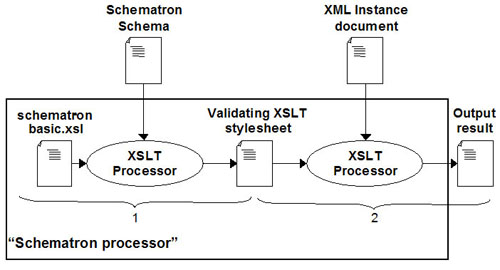 Version 1.5 of Schematron was released in early 2001 and the next version is currently being developed as an ISO standard. The new version, ISO Schematron, will also be used as one of the validation engines in the DSDL (Document Schema Definition Languages) initiative.

An include mechanism will be added to ISO Schematron that will allow a Schematron schema to include Schematron constructs from different documents.

In Schematron it is common for a rule to contain many assertions that test the same information. If the information is selected by long and complicated XPath expressions, this has to be repeated in every assertion that uses the information. This is both hard to read and error prone.

In ISO Schematron a new element let is added to the content model of the rule element that allows information to be bound to a variable. The let element has a name attribute to identify the variable and a value attribute used to select the information that should be bound to the variable. The variable is then available in the scope of the rule where it is declared and can be accessed in assertion tests using the $ prefix.

Using the new let element this can be implemented like this in ISO Schematron:

A change requested by many users is to allow value-of elements in the assertions so that value information can be shown in the result. The value-of element has a select attribute specifying an XPath expression that selects the correct information.

In the above schema the assertion that for example checks the hour could then be written so that the output result contain the erroneous value:

would then generate this output:

Abstract patterns are a very powerful new feature that allows the user to identify a specific pattern in the data and make assertions about this pattern. If we keep to the example above the abstract pattern that should be validated is the definition of a time with three parts: hour, minute and second. In ISO Schematron an abstract pattern like the following can be written to validate this time abstraction:

Instead of validating the concrete elements used to define the time this abstract pattern instead work on the abstraction of what makes up a time: hours, minutes and seconds.

the concrete pattern that realises the abstract one above would look like this:

If the XML instead uses a different syntax to describe a time the abstract pattern can still be used for the validation and the only thing that need to change is the concrete implementation. For example, if the XML looks like this

the concrete pattern would instead be implemented as follows:

This means that the abstract pattern that performs the actual validation will stay the same independent of the actual representation of the data in the XML document.