Of Grouping, Counting, and Context

John Simpson is the author of XPath and XPointer.

Q: How do I count the number of elements with a given attribute value?

I want to get output like this (for the Liverpool team):

A: Great question. The answer requires knowledge of a couple of XSLT techniques: grouping (with XSLT keys) and using the count() function.

Here's the relevant portion of an XSLT stylesheet to solve the problem; notes on the code follow, particularly on the portions which are in boldface:

This code fragment first sets up an XSLT key -- something like an index in DBMS terms. The name of the key is "player"; it matches on a pattern identified by the XPath expression @Scorer. The value of the key, given by the use attribute, is the string-value of that match pattern. Note that the xsl:key element is a top-level element, a child of the root xsl:stylesheet element. Thus the match pattern isn't "relative" to anything at all in the source tree -- there's nothing like a context node to which it can be relative -- until the key is actually invoked, using the key() function, by some lower-level stylesheet template or instruction. Importantly, unlike a DBMS unique index or an XML ID-type attribute, an XSLT key may point to more than one "thing" at a time. Also unlike ID-type attributes, keys aren't restricted to identifying elements only. In this case, we're going to be grouping on the basis of attributes which share the same value: the Scorer attributes in the source tree.

There's one template rule in this stylesheet fragment. For every occurrence of a Team element in the source tree, as located by the xsl:template's match attribute, the template constructs a three-column table. Two columns display the names of the scoring players on each team and the number of goals scored; I've added the third column just to demonstrate how the keying works.

The first thing of interest in the template rule is the xsl:for-each element within it. Its select attribute starts clearly enough --"for each Scorer attribute of a Goal child of the context Team element" -- but then seems to trail off into gibberish when it moves into the predicate.

What that predicate is doing is a form of the so-called Muenchian method for grouping data in ways not "built-in" to the structure of the source tree. The name of this technique, by the way, comes from Steve Muench of Oracle Corporation, who first popularized it on the XSL-List mailing list. It takes advantage of a couple of features of the XSLT generate-id() function:

The third column in the table simply shows how the generate-id() function works for each unique Scorer value. Again, remember the two rules in the preceding list: a given key must be unique for any given "seed value," and an XSLT processor is free to use any key-generation algorithm it wants as long as it results in the same key (a generated ID, in this case) for a given seed value in a given processing instance. Here's how Microsoft's MSXML processor formats the table in a typical instance: 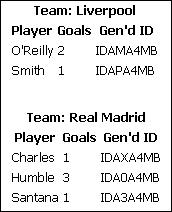 If you use the Saxon processor to transform the source tree with the above XSLT code, you might get something like the following instead (results obtained from Saxon 6.2): 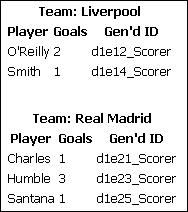