It came as a very pleasant surprise last week to hear that Adobe has released a version of its SVG browser plug-in for Linux and Solaris. Being an habitual Linux user, I had resigned myself to not being able to see SVG on the Web until the Mozilla project had progressed further with its implementation of the W3C's vector graphics standard, so news of the plug-in was welcome indeed.

Downloading and installing the plug-in proved simple, and I was happy to see that the installer detected that I was using Mozilla, without any extra manipulation required. The first time the plug-in is run, you are required to agree via a dialog to Adobe's licensing conditions. The start-up time for the plug-in is, unfortunately, disconcertingly long: one hopes that speed improvements will follow with later releases. 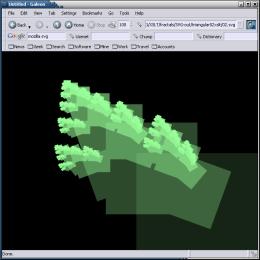 Speed issues aside, I had no problem viewing SVG content with the plugin. The screenshot shows a view of one of Tobias Reif's fractal SVG images, generated using XSLT. One of the nice features of the plugin is the "view source" option -- precisely what, to my mind, makes SVG a better long-term bet for web graphics than proprietary technologies such as Macromedia Flash: the ability for anyone to adapt and transform SVG graphics using others' documents to learn.

Adobe, so recently the target of much popular ire, should be praised for spending the resources on a Linux version of its software and, unusually for a commercial vendor, producing a piece of software that installs in a way sympathetic to Linux, rather than fighting against it.

Now that viewing SVG is really a cross-platform reality, I hope that open source developers -- who have contributed much to the XML software world -- will be encouraged to create more SVG software and help SVG to the ubiquity achieved by other XML technologies. If the recent mushrooming of traffic on SVG mailing lists is anything to go by, SVG's future looks bright.

Those of us now enveloped by the cold and gloom of winter can cheer ourselves with the prospect of a trip to Spain next May. I have the pleasure of chairing the XML Europe 2002 conference, which will be held in Barcelona from 19th-24th May next year, and I hope that as many XML.com readers and contributors as possible will be able to join me there.

I'd especially like to highlight the current call for participation. The closing date for most submissions is 14th December, so if you're planning to contribute to the conference, now is the time to submit your proposal. Proposals can be conveniently submitted via an online form.

The XML Europe conference traditionally takes a broad look at the industry, catering to all tastes: from the technical to the business-oriented and strategic. Suggested topics for talks include case studies, content management, core XML technologies, databases, electronic business, government and legal, graphic and multimedia, knowledge technologies, publishing, and web services. Some topics that I'd welcome talks on in particular include modeling techniques for XML vocabularies, the legal aspects of using XML, and patterns for XML-oriented software development. However, feel free not to let these suggestions limit you in your subject matter.

Every industry, once grown sufficiently insular, has an awards ceremony, and the XML world is proving no exception. The XML 2001 conference, taking place next week in Orlando, will be awarding an "XML Cup" for outstanding individual contribution to the XML industry, which will no doubt be given to a very worthy recipient. Everyone knows, however, that underneath the genial back-slapping that goes with awards lies a considerable amount of backbiting.

Never one to dissemble, it seems time for the XML industry to embrace the backbiting, and provide a balance to the laudable aims of the XML Cup. Hence, I'm pleased to introduce the XML.com <taglines/> Anti-Awards 2001. The gongs themselves will be awarded as part of XML.com's holiday festivities in late December, and nominations are open until then. The vote will be decided by a panel of biased and bitter judges, but be approximately based on readers' nominations.

Here, then, are the categories:

Some further notes: mail nominations, with justifications where possible, for each or any of the categories to awards@xml.com. All nominations will be kept confidential. Bribes should be no less than $10.